Posted on September 26, 2010 by Annex Galleries

Margaret Kidder (American/CA: 1904 – 1959) was a painter and printmaker, who produced a small but delicately complex body of work in a her short life. At a time when women artists rarely departed from the safe and accepted forms of female subject and technique (picturesque, decorative), Kidder’s work quietly broke the mold. 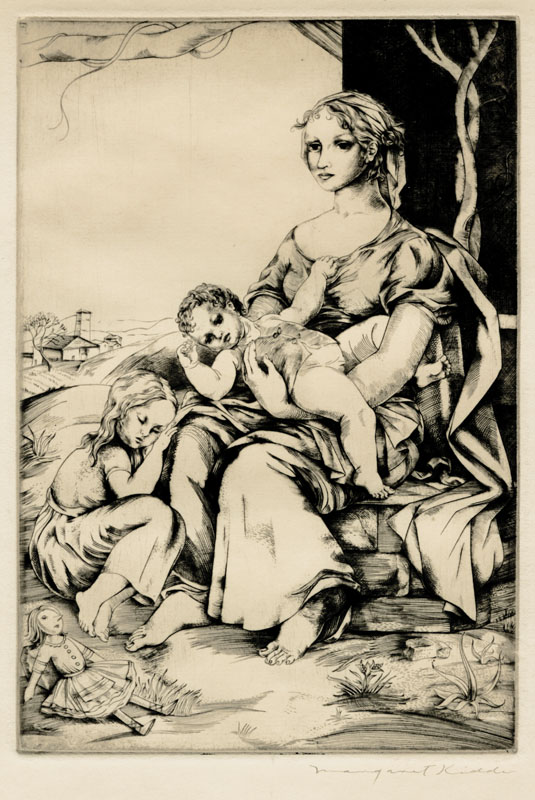 Before the dramatic turn of events for women in the arts in the mid-century, Surrealism, Abstract Expressionism, and questioning the human condition were predominantly male pursuits. However, Kidders work evokes these qualities in a subtle, delicate approach: In the suggestion of sadness or longing sometimes portrayed in the mothers’ eyes, a solitary quietude in the women and the protective or melancholy expression of the children, and dark landscapes or drapery that often surrounds the figures.

While not departing from feminine themes, the images belie a careful construction of complex emotion and a dark ethereality.

Not much is known of Kidder’s life and her death remains a mystery, but the imagery she produced suggests what might have been an intellectually and emotionally insightful person whose work would likely have become more prominent, had she had more time to create and show it.

The Annex Galleries holds one of the largest original fine print inventories on the West Coast. With over 9,000 works, we specialize in (but are not limited to) original prints of the WPA era, Arts & Crafts movement, and Abstract Expressionism through the 1960's, with a focus on American and Californian artists both known and unknown. We have everything from Durer to Baumann to Picasso.
View all posts by Annex Galleries →
This entry was posted in Biography, Discoveries, Social Commentary. Bookmark the permalink.