This blog remembers the remarkable abstract expressionist printmaker Seong Moy, who passed away on June 9, 2013. Mentored by Vytlacil, Hofmann and S.W. Hayter at Atelier 17, his large abstract color woodcuts, which often also incorporated cardboard relief have always been a gallery staple and we have worked with his daughter Jacqueline to keep his legacy alive. This link will take you to our website inventory.

For a clear explanation of Moy’s technique we recommend reading the entry by David Acton in A Spectrum of Innovation Color in American Printmaking, Worcester Art Museum, 1990, page 194.

The following biography is drawn from numerous sources including an obituary in the New York Times, written by his daughter, Adrienne Moy.

A native of China, Seong Moy was born in Canton on April 12, 1921 but he immigrated to the United States in 1931, settling with his family in St. Paul, Minnesota. Moy began his art studies as a teenager at the WPA Federal Art Project. He continued his art education at the St. Paul School of Art under Cameron Booth, and the WPA Graphic Workshop at the Walker Art Center in Minneapolis, MN.

In 1941, he was awarded a scholarship to the Art Students League in New York where he studied with Vaclav Vytlacil and that same year 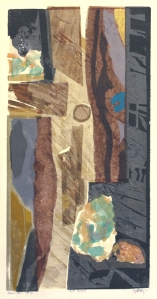 he studied at the Hofma

nn School with Hans Hofmann. Later in 1941, Moy enlisted in the Air Force and put his art education on hold. He served in the 14th Air Force, the “Flying Tigers,” in the China-India-Burma Theater where he worked as an aerial reconnaissance photographer in China and Southeast Asia. After the war, he returned to New York with his new wife, Sui Yung. He returned to the Art Students League on the G.I. Bill and re-established his relationship with Cameron Booth, who was now teaching in New York. Although Mr. Moy was primarily a painter during the post-wars years, he began making prints when he received a fellowship to work at Stanley William Hayter’s graphic art workshop, Atelier 17, which had moved to New York in 1940 after its founding in Paris in 1927. The workshop was a center for the development of new techniques and attitudes towards printmaking.

Moy began his teaching career in 1951 with painting classes at the University of Minnesota. Over the years he taught part time at various universities and colleges, including Smith College, Vassar College, Cooper Union, the Pratt Graphic Center and the Art Students League.

Following the lead of Hans Hofmann, Moy opened his summer school in Provincetown in 1954 and taught painting, drawing and printmaking for twenty years. He won a Guggenheim Fellowship in 1955 and became professor of art at the City College in New York. Moy’s work has been included in numerous solo and group exhibitions and is held in the collections of the Metropolitan Museum, the Whitney Museum of American Art, Brooklyn Museum and the New York Public Library.

He returned to a newly developing China in 2008, at the age of 85, accompanying his wife, daughters and grandchildren to the rural villages where he and his wife were born in the 1920s.

The Annex Galleries holds one of the largest original fine print inventories on the West Coast. With over 9,000 works, we specialize in (but are not limited to) original prints of the WPA era, Arts & Crafts movement, and Abstract Expressionism through the 1960's, with a focus on American and Californian artists both known and unknown. We have everything from Durer to Baumann to Picasso.
View all posts by Annex Galleries →
This entry was posted in Abstract Expressionism, Atelier 17, Biography. Bookmark the permalink.