In our fifth installment in a series of small online exhibitions, the focus is on women printmakers. The role of women in the printmaking world was often largely overlooked, in part because the social circumstances of the time. However, there were a number of fine women artists who worked in printmaking and many of them made great inroads into the various techniques, often changing the face of the medium in her own way.  In the 21st century the landscape is changing and many of these Fine Artists are beginning to be shown, researched and given their due recognition.  This list highlights 25 of these artists.

In keeping with our goal, we’ve selected a wide sample of styles in order to open up our expansive inventory to the public.  There are often more examples of the artist’s works on the website if an image intrigues you.

Under each image we’ve provided a link to the work on our website where prices and more specific information is available. There, we also provide biographies and specific comments regarding the work when available.  If you have any questions, please contact us.

Dorr Bothwell (American.: 1902 – 2000): Mallorca, 1951; color serigraph; 13 x 9″ image size; 9/25; pencil signed, lower right. Bothwell’s use of screenprint to create complex abstract imagery was relatively rare for its time. In “Mallorca,” Bothwell, a world traveler, pulled ideas from her time spent living near the Mediterranean in the early 1950s to create this vivid print. 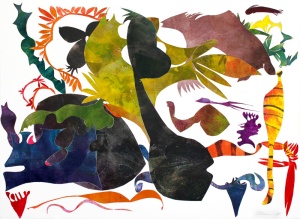 Louise Gilbert (American: 1913 – 2005): The Fisherman, circa 1955; color woodcut; 18 x 16-1/4″ image size; proof, from outside the edition of 20; pencil signed, lower right. Gilbert’s strong lines and Modernist composition are complimented by the movement of the visible wood grain. 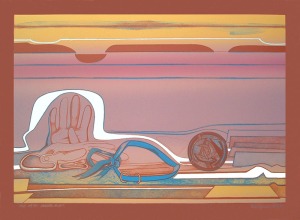 Francoise Gilot (French: 1921 – 1986): Rose of the Desert, 1977; color lithograph; 22 x 30″ image size; B.A.T. proof from out the edition of 100; pencil signed, lower right. Gilot was adamant about being known as a painter first, and a lithographer second. However, as seen in this sunset-hued still life, her technical skill was keen, and blended well with her eye for color. 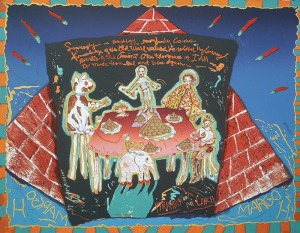 Margo Humphrey (American: born 1942): Pyramids for Lunch, 1984; color lithograph; 22-1/2 x 28-1/4″ image size; 4/4 printer’s proofs; pencil signed on verso. “Pyramids for Lunch,” as with most of Humphrey’s work, is a narrative relating to her personal experiences made up of her own unique iconography. 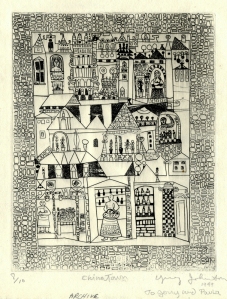 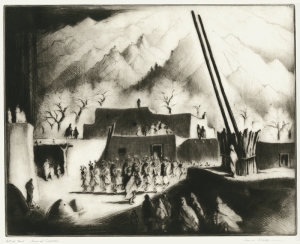 Gene Kloss (American: 1903 – 1996): Song of Creation, 1949; drypoint; 11-15/16 x 14-7/8″ platemark; artist’s proof; pencil signed, lower right. The dramatic New Mexico landscape and the lives of its native inhabitants were strong threads in Kloss’s art. The dramatic contrasts of light and shadow, and the beauty of ceremony, play out in fantastic visual balance in “Song of Creation”. 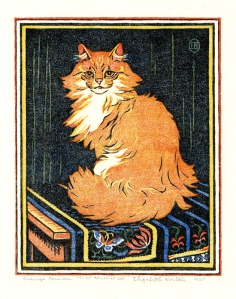 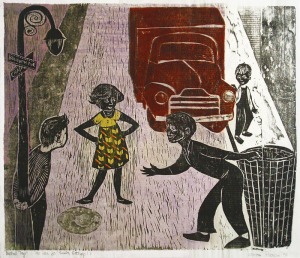 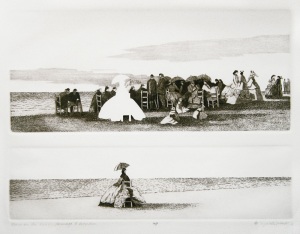 Norbertine Von Bresslern-Roth (Austrian: 1891 – 1978): Kampf, 1928; color linocut; 8-5/8 x 8-11/16″ image size; edition size not stated; pencil signed, lower right. Bresslern-Roth’s depiction of a battle between a lobster and octopus is visually striking, yet quietly, elegantly composed of muted tones and a focus on the movement of the underwater fighters.

Beth Van Hoesen (American: 1926 – 2010): Wendy, 1985; drypoint with roulette; 8 x 7-7/16″ platemark; 8/10; pencil signed, lower left. Van Hoesen’s “Wendy” cleverly utilizes the dog’s spot pattern as a means to give form to the dog herself. From a distance, it is an abstract composition; up close, it is an elegant portrait of a curious Dalmation. 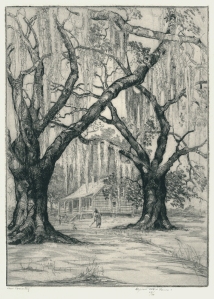 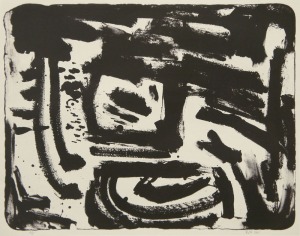 Ruth A. Wall (American: born 1917): Untitled (black and white), 1952; lithograph; 13-7/8 x 17-7/8″ image size; 2/5; pencil signed, lower right. Wall came to printmaking later in her life, pursuing art in her early 30s, and her approach to it was purely out of personal interest. This freedom of thought and expression is reflected in her stunning, energetic abstract expressionist lithograph. 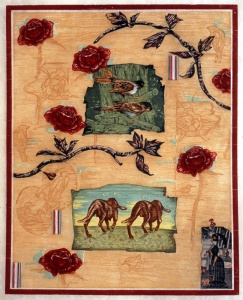 June Claire Wayne (American: 1918 – 2011): Wave Nineteen Seventy, 1970; color lithograph from one stone and one zinc plate; 29 x 17-3/4″ image and paper size; pencil signed, lower right. Wayne’s “Wave” is a wonderful example of her experimental work with litho stone, achieving texture and layers of color that opened new paths for Abstraction in the medium of lithography.

This concludes Part V of our Treasure Hunt.

The Annex Galleries holds one of the largest original fine print inventories on the West Coast. With over 9,000 works, we specialize in (but are not limited to) original prints of the WPA era, Arts & Crafts movement, and Abstract Expressionism through the 1960's, with a focus on American and Californian artists both known and unknown. We have everything from Durer to Baumann to Picasso.
View all posts by Annex Galleries →
This entry was posted in Arts & Crafts, Color Woodcut, Discoveries, Exhibition and tagged architecture, art, arts, arts and crafts, illustration, modernism, portraits, printmaking, printmakng, Surrealism. Bookmark the permalink.