In our second installment in a series of small online exhibitions, the focus is on portraits: self portraits, portraits of other artists, and portraits of everyday people. In keeping with our goal, we’ve selected a wide sample of techniques in order to open up our expansive inventory to the public.

Under each image we’ve provided a little bit of information on the piece, with a link to the work on our website. There, we provide biographies when available, as well as any other pertinent information we couldn’t fit here. If you have any questions, just let us know. 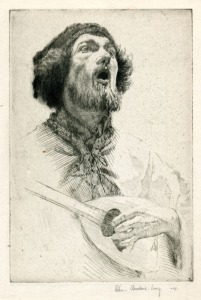 “The Troubador,” by William Auerbach Levy. $500

William Auerbach-Levy (American.: 1889 – 1964): The Troubadour (Roi Partridge), etching; ca. 1911; edition size not stated. Auerbach-Levy became known for his caricatures of prominent social figures. This portrait of the artist Roi Partridge was done early in Auerbach-Levy’s studies, when the two were roommates in Paris.

Milton Avery (American: 1885 – 1965): Head of a Man, drypoint; 1935, printed 1948; pencil signed. Avery and the subject of this piece, Weisenberg, were both members of the “Croquis Club” of New York — a “class without instructors” composed of several international artists who often gathered at the Art Students League to study together. When there were no models to sketch, they drew one another.

Fred Becker (American: 1913 – 2004): Self Portrait, wood engraving; 1984; pencil signed. Becker did this woodengraving when he was 71 for a portfolio titled “Face to Face – Artist’s Interpret Themselves.” A little humor lends a glimpse into the artist’s mind, the eyeglass sign hung on the building in the background mimicking the artist himself.

Karl Bodmer(Swiss: 1809 – 1893): Wak-Tae-Geli, a Sioux Warrior, hand-colored aquatint; 1839-43. Prince Maximillan of Weid, Germany, created a portfolio of prints after Bodmer’s watercolors of his travels in North America. This was originally a full-length portrait of the Yankton Sioux chief, and most of the detail, minute and precise, is captured in this carefully reproduced aquatint.

Harvey Breverman(American: born 1934): Study of Michael Rothenstein, color lithograph; 1973; pencil signed. Both Breverman and Rothenstein, friends for nearly 20 years, studied at the experimental Lakeside Studio in Michigan, where this print was created. 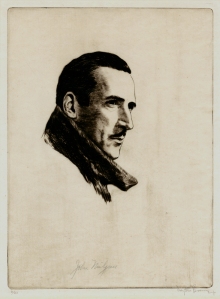 Dayton Brown(American: 1895 – 1971): John Miljan, drypoint; ca. 1920; pencil signed by artist and subject. Brown made a name for himself creating portrait prints of Hollywood’s elite. He created this portrait of actor John Miljan near the start of the Serbian native’s silent movie career.

Self portrait by Minerva Josephine Chapman. $1,000

Minerva Josephine Chapman (American: 1858 – 1947): Self Portrait, graphite drawing; 1896; pencil signed. Chapman’s deftly rendered self portrait captures intensity and life in a tiny window. In the shadows, the pencil has been pressed firmly into the paper, creating an almost three dimensional, sculpted surface out of which her face begins to emerge. 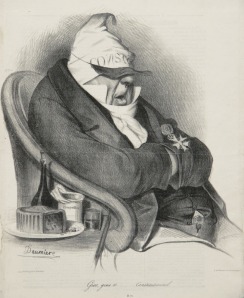 Honore Daumier (French: 1808 – 1897): Gros, Gras et… Constitutionnel, lithograph; 1833. Daumier’s talent for summing up political and social strife with caricatured, humorous commentary is illustrated perfectly in this lithograph. The King and the conservative newspaper “Le Constitutionnel” are one and the same, says the image, and have no outlook on the fate of France.

“Rembrandt” – from the portfolio “Homage” by Fritz Eichenberg. $200

Fritz Eichenberg (American: 1901- 1990): Rembrandt – from the portfolio “Homage”, woodengraving; 1984; pencil signed. Eichenberg wonderfully depicts one of his favorite inspirations, Rembrandt, both through his own interpretation and, in the background, using Rembrandt’s own self-portraits.

Franz Geritz (American: 1895 – 1945): Hamlin Garland, lithograph; 1933; pencil signed. Geritz did many smaller, more graphically executed woodcut portraits. This lithograph, of poet, author, and essayist Garland, better illustrates his understanding of nuance, in the fluidity of the lines and shadows.

“Self Portrait with Glasses” by Max Klinger. $900

Max Klinger (German: 1857 – 1920) Selbstbildnis mit Brille (Self-Portrait with Glasses), lithograph; 1909; pencil signed. Klinger’s penchant for Symbolism isn’t evident in this literal, elegant view of the self, but his deft use of texture to convey depth and shape remains as lovely as in his larger, more complex works. 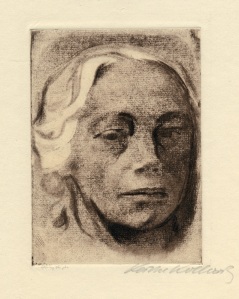 Kathë Kollwitz (German 1867 – 1945): Selbstbildnis (self-portrait), etching and transfer; 1912; pencil signed by the artist and the printer, Otto Felsing. Kollwitz’s unapologetically dark imagery, ethereal and lovely, is illustrated in this penetrating self portrait.

“Self Portrait with Cigar” by George Luks. $600

George Luks (American: 1867 – 1933): Self-Portrait with Cigar, pencil drawing; 1894; pencil signed. A seasoned caricaturist, Luks drew this the year he took a position at the Philadelphia Press, at a party for the arts department.

Mariette Lydis(Austrian/French: 1884 – 1963): Juana, lithograph; ca. 1930; pencil signed. This portrait of a young woman and a turkey is typical of Lydis’ work, ethereal and surreal. 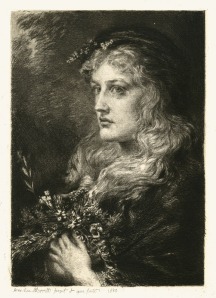 “Ophelia (portrait of Ellen Terry in the role)” by Anna Lea Merritt. $250

Anna Lea Merritt(American: 1844 – 1930): Ophelia (portrait of Ellen Terry in the role), etching; 1880; signed in plate. Merritt studied patients at a British mental institution to try to distill the essence of Shakespeare’s tragic heroine. 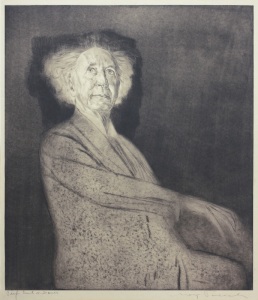 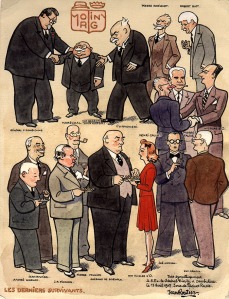 Jean Routier (French: active 19th and 20th centuries): Les Derniers Survivants (the Last Survivors), ink and watercolor; 1947; ink signed. Routier depicts various caricatures of fellow artists; though its title intriguingly suggests a story to go along with this host of talents, there was none to accompany it. 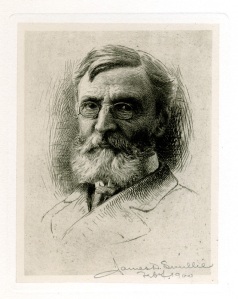 “Portrait of Self” by James David Smillie. $600

James David Smillie (American: 1833 – 1909): Portrait of Self, etching, printed chine collé; 1900; pencil signed. Smillie purportedly struggled with his self portrait, which was to be exhibited at the Century Association’s 1900 show. By all accounts he succeeded, rendering himself as he would any of his prints, with elegant simplicity.

Beth Van Hoesen (American: 1926 – 2010): Cap (State I), color aquatint and drypoint with additional watercolors; 1973; pencil signed. One of Van Hoesen’s early forays into color prints is complimented by her focus on texture to create shape, evidenced in the twisting of the knit in both the cap and sweater.

James Abbott McNeill Whistler (American: 1834 – 1903): Becquet (The Fiddler), drypoint and etching; 1859 -60; unsigned, as usual. Whistler reused a plate, which had been intended as a view of West Point, to portray French sculptor and amateur musician Justin Becquet. Portions of the old image can be seen in the lower half of the plate.

This concludes Part II of our Treasure Hunt.

The Annex Galleries holds one of the largest original fine print inventories on the West Coast. With over 9,000 works, we specialize in (but are not limited to) original prints of the WPA era, Arts & Crafts movement, and Abstract Expressionism through the 1960's, with a focus on American and Californian artists both known and unknown. We have everything from Durer to Baumann to Picasso.
View all posts by Annex Galleries →
This entry was posted in Arts & Crafts, Color Woodcut, Discoveries, Exhibition and tagged art, arts, illustration, portraits, printmaking. Bookmark the permalink.