Bernard Childs: Finding the Life in the Plate

Posted on November 3, 2010 by Annex Galleries

Bernard Childs’s engravings are remarkably filled with movement, elegance, and color—they are a result of a controlled dance of power tools across the plate. Despite their intimate and delicate lines his engravings belie the power of the tool and the hand that created them. 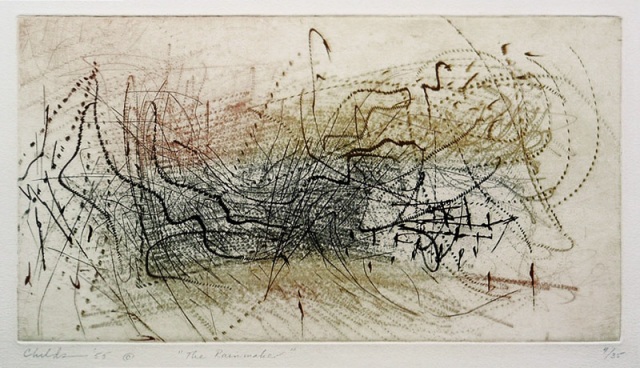 In 1930 Childs met Peer Smed, a Danish silversmith, at his atelier in an abandoned newspaper building in New York. According to the artist, ”It was a world that I was to fall in love with forever. It was to be the core of all that was to develop in engraving, and now, in light, electronics and machines.“ 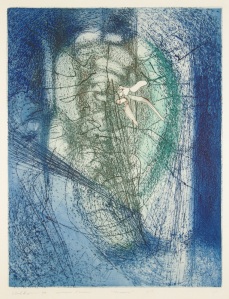 Childs wrote about Peer Smed in 1969 and his words hint at the affection and reverence he held for the silversmith, “Per [sic] Smed taught without words. I learned from his hands. I learned to love metals, the feel of them in my hands, the joy of fashioning them, the tools that can bring them to life.” 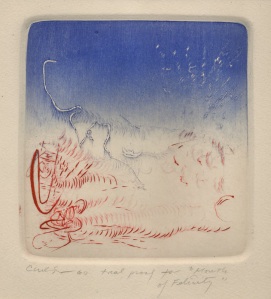 Between 1941 and 1942, Childs worked as a machinist in a factory converted to wartime production and what he learned from Smed “was to become widened by the use of lathes, planes, shapers and other industrial tools.” Years later when he began making prints this knowledge was his foundation for working on metal plates with electric power tools. 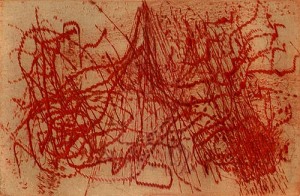 In 1961 Childs wrote about his press and the power, force and sensitivity of printing. “The double-geared intaglio press which eats up a quarter of the studio’s precious space is a lovely old job, a beautiful and impressive machine. But to look at its huge wheel, the heavy rollers, throws me back to dungeon racks, exquisite and unrefined torture, the embrace of the spiked Madonna. I know what is to happen as soon as my hands get on the handle of that wheel.

Moving away from the realm of paint, the chains become more real than those known by the galley slave. A whole new set of muscles, sensitivities, sounds, touches must be lashed and leased—the reek of the gasoline, the violence of power cutting tools, the patient filing of infinitesimal grains of metal, the saturation bodily in ink and re-inking, the last ritual of wiping the plate’s edge before the metal and I myself are placed on the sacrificial bed plate, the final benediction of soaking paper, the covering of the felt blankets, and then the remorseless roll of the press, my own hand at the wheel, my own bones and blood oozing through the cast iron rollers.

Who wouldn’t shudder, vacillate, go through every procrastinating antic before committing and consigning himself to such a process. Does the victim relish walking the plank, embracing the noose, dropping the trap with his own hand. How do you explain love.”

(Many thanks to Judith Childs for sharing Bernard’s writing.)

The Annex Galleries holds one of the largest original fine print inventories on the West Coast. With over 9,000 works, we specialize in (but are not limited to) original prints of the WPA era, Arts & Crafts movement, and Abstract Expressionism through the 1960's, with a focus on American and Californian artists both known and unknown. We have everything from Durer to Baumann to Picasso.
View all posts by Annex Galleries →
This entry was posted in Biography and tagged Bernard Childs; abstract expressionism; intaglio printmaking; prints; fine prints; art. Bookmark the permalink.

3 Responses to Bernard Childs: Finding the Life in the Plate