Posted on September 7, 2010 by Annex Galleries

Elizabeth Quandt was born in Oxfordshire, England on July 13 1922.  Her father, Glasgow born Sir James Gunn, RA (1893 – 1964), attended drawing lessons from the age of five. He studied at the Glasgow School of Art, the Edinburgh College of Art and the Académie Julian in Paris. From 1929, Gunn devoted himself to portrait painting. He received commissions from many leading figures of the day including prime ministers, field marshals, judges, dons, bankers and actors. One of Gunn’s notable portraits was Conversation Piece at Royal Lodge, Windsor, a portrait of George V and his family commissioned for the National Portrait Gallery in 1950. His portrait of Elizabeth II painted for the Royal Artillery regiment, was voted painting of the year at the Royal Academy in 1953.

Elizabeth studied at Queen Anne’s School in England, where she received her certificate in 1939.  During WWII she met and married American William Mailliard   and moved to San Francisco.  Mailliard was from an old San Francisco family and went on to be a California state Representative.  Elizabeth attended the San Francisco Art Institute between 1942 and 1944, studying printmaking.  She returned to the Art Institute between 1956 and 57 and again between 1965 and 1969, this time earning both a B.F.A. and an M.F.A.

After a divorce Liz married photographer Frederick “Bill” Quandt, who had been Ansel Adams’ assistant in San Francisco and who was recommended by Adams to fill his position at the Art Institute, along with Minor White.  Quandt taught photography there from 1946 to 1954.  The couple then moved up to Santa Rosa, CA.  After his death at age 42 in 1964 she married sculptor Roger Barr in 1971. 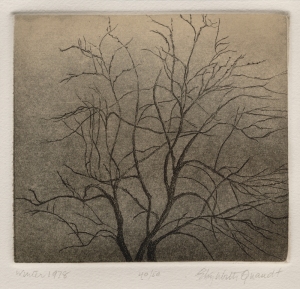 Liz Quandt was a close friend and we did a couple of shows for her over the years and represented her prints.  We have a number of her works in inventory, of special interest are the series of 4 etchings she title the “Aries” suite which are based on the skull of a ram which had been entwined  in some trees and which was found by her grandchild.

Please go to our website to see more of Elizabeth Quandt’s work.

The Annex Galleries holds one of the largest original fine print inventories on the West Coast. With over 9,000 works, we specialize in (but are not limited to) original prints of the WPA era, Arts & Crafts movement, and Abstract Expressionism through the 1960's, with a focus on American and Californian artists both known and unknown. We have everything from Durer to Baumann to Picasso.
View all posts by Annex Galleries →
This entry was posted in Biography, Discoveries. Bookmark the permalink.